Who said alternative fuel automobiles had to be slow?

On September 9th, 2010 on an empty strip of the Autobahn, G-Power brought their newest M5 for a customary top speed test. But, what was so different about this new M5 wasn’t its twin-supercharged V-10; it was the fuel that powered it. Using Liquefied Petroleum Gas (LPG), the alternative fueled performance-tuned M5 Hurricane GS was able to reach a scorching top speed of 333 km/h (206.92 mph) – a new world record for an LPG-powered car!

Seeing the words “performance” and “alternative fuel” used in the same sentence, especially with the phrase “record-breaking top speed” thrown in there, is sort of a rarity, even today when automakers are searching for greater fuel efficiency. However, G-Power has a bit of an advantage over most aftermarket tuners (and even a few automakers) as they have been able to create high-powered tuning programs with little to no penalty in fuel efficiency. So, the German tuner decided to show off its knowledge of conservation and environmental protection by developing and offering a new LPG conversion for the BMW M5 and M6. The alternative fuel not only decreases the environmental impact of the G-Power LPG M5 Hurricane GS by reducing CO2 emissions by 15 percent, but it is also about 50 percent less expensive than gasoline.

Converting a gasoline engine to run on LPG can be a challenge. Converting a twin-supercharged V-10 is an even harder task. But, the engineers at G-Power had some cards up their sleeves, as they were both experts on supercharging and the BMW S85B50 V-10 engine. To convert the V-10 from using gasoline to LPG, engineers had to fit a fully-sequential five-cylinder LPG system for each cylinder bank.

However, the conversion doesn’t end with the installation of two LPG systems. Since the 5.0-liter V-10 is supercharged by two belt-driven ASA T1313 compressors in the SK II bi-supercharger system, the entire setup had to be retuned. The boost pressure from both superchargers had to be limited to 0.6 BAR (8.7 PSI) in addition to a re-mapping of the ECU and SMG transmission control. To cool the pre-compressed air, G-Power fitted a bright orange twin-scroll water cooled intercooler, while a new cast aluminum airbox sucks in air. The result of the conversion to LPG fuel is spontaneous throttle response with low-end torque that is not found on the stock V-10. Power is increased to 660 horsepower at 7,500 RPM and 479 lb-ft. of torque at 5,000 RPM. The added performance catapults the LPG M5 Hurricane GS to 62 mph in just 4.6 seconds and 124 mph in only 11.4 seconds. The top speed of 333 km/h (206.92 mph) is still available to the customer and not electronically-limited.

The G-Power BMW LPG M5 Hurricane GS isn’t just about its LPG conversion. The powerful sedan rides on a new G-Power RS coil-over sports suspension that allows for nine-way adjustability. New 9 x 20 front and 10.5 x 20 rear Silverstone Clubsport forged wheels are also fitted and are no heavier than the stock wheels despite being larger. The forged wheels are fitted with 255/35 ZR 20 front and 285/30 ZR 20 rear Michelin tires for improved grip and handling. G-Power has also fitted their high-performance braking system to bring the two-ton sedan to a halt. 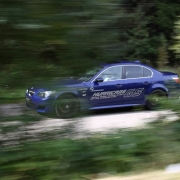 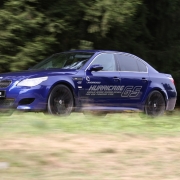 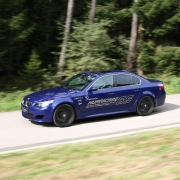 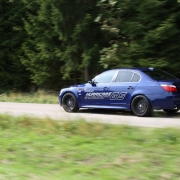 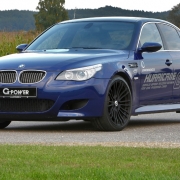 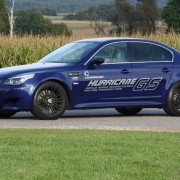 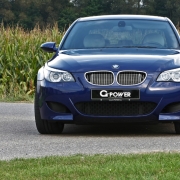 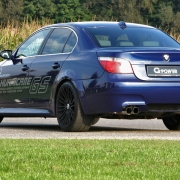 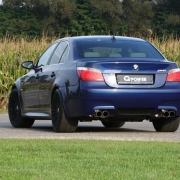 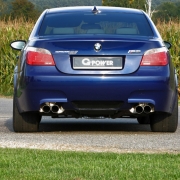 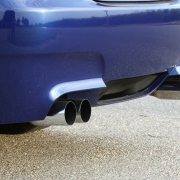 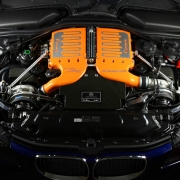 Would you choose the LPG-powered M5 Hurricane GS over a similarly-equipped gasoline M5? Leave a comment and let us know why or why not!