The Omega brand speaks of quality, luxury, romance, and it seems, a little bit of intrigue as well. Visit their official site and you’ll find a link to ‘Ambassadors’. James Bond, our mysterious, sexy, and oh so classy 007 apparently has another role to play – that of an official Omega Ambassador.

Although Ian Fleming wrote about James Bond and his Rolex Explorer, he actually never wore one in his earlier movies. Ian’s own watch of choice was a Rolex Explorer ref. 1016, as James Bond watch specialist Dell Deaton found out. The first watch on James Bond’s wrist was a Submariner ref. 6538 in Dr. No.

It wasn’t until 1995 that James Bond strapped on an Omega Seamaster Professional – a quartz-model 2541.80 to be exact. Unlike the Seamaster Professional you could buy at your local Omega dealer, this one was able to cut through steel with a laser beam. In 1997’s Tomorrow Never Dies, Bond made a lot of watch fans happy by wearing an automatic version of that watch, the ref.2531.80. One of the more successful watches Omega has created, even today, people ask Omega dealers for the ‘James Bond’ watch. In 1999, Omega backed up facts with figures, by reporting the ref.2531.80 as their best selling watch from the Seamaster-line.

The Seamaster was introduced by Omega in 1993, and features skeleton hands, an automatic movement (first the cal.1109 and soon to be replaced by the cal.1120 movement), wave pattern dial, a manual helium valve, and a diving depth of 300 meters below surface. The ref.2531.80, or Seamaster Professional Chronometer 300M as Omega calls it, has been used in Tomorrow Never Dies (1997), The Word Is Not Enough (1999) and Die Another Day (2002).

Shaken but not stirred? You can say that! Although Omega brought out a number of spin-offs versions of this model, such as America’s Cup, the Chronograph Diver in stainless steel, titanium, gold or a combination of the last two, a GMT version, and a number of combinations using a different dial and bezel colors, James Bond (or Eon Productions) continued to be true to his model. A strong decision in our view, since too much change doesn’t suit Mr. Bond, although Eon productions went a bit too far in having him drive in a European Ford in Casino Royale!

In the Casino Royale remake, starring Daniel Craig as the secret agent from MI6, Bond wears the ref.2220.80 Seamaster Professional with co-axial movement. Also starring in this movie is the Seamaster Planet Ocean, Omega’s unofficial re-make of the early 1960s Omega Seamaster 300. The Planet Ocean took over in the last James Bond movie, Quantum of Solace. Unfortunately, the 2220.80 wasn’t able to live up to Eon Productions (or James Bond’s) requirements and expectations of a Bond’s watch.

Now, in 2010, one could say the Seamaster Professional Chronometer 300M is an outdated watch, but except for the 1990s bracelet design, we beg to differ. The price of these watches went up from approximately 1600 Euro for the 2531.80 when it was being sold prior to 2006, to 2440 Euro for its successor, the ref.2220.80. Compared to other divers from renowned brands, 2440 Euro seems to be very acceptable for a professional diver’s watch. However, if you want to have the original James Bond Omega Seamaster with an automatic movement, try to get a ref.2531.80 model on the used market. Approximately 1000-1200 Euro should get you very far in your quest for one in good condition. You can choose to use a rubber strap with Omega deployant clasp if you have some doubts about the bracelet; expect to pay another 200 Euro for these additional accessories.

17 years after the introduction of the Omega Seamaster Professional Chronometer 300M diver, we could say this has become a modern classic with an MI6 twist.

Special thanks to our friend Dell Deaton with JamesBondWatches.com for the detailed information on James Bond movies and featured watches. 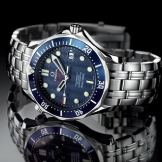 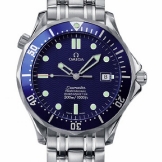 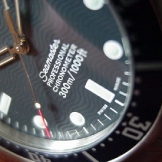 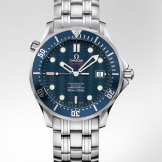 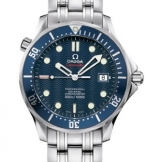 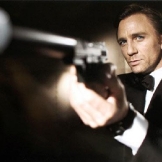 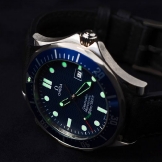 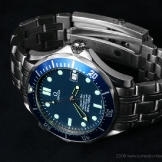 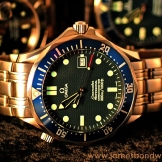 What are your thoughts on the Omega Seamaster? Leave us a comment and let us know!