Breitling’s Navitimer is probably the most popular pilot’s watch since its launch in 1952. Even people who don’t care much about watches can possibly point out a Navitimer for you.

What the Submariner is to Rolex and the Speedmaster Professional is to Omega, the Navitimer is to Breitling. So strong is its appeal, that if Breitling should decide to make only one model from now on, they would undoubtedly select the Navitimer; possibly even the one we are talking about right now, the Navitimer Caliber 01.

Breitling was one of the first manufacturers to introduce an automatic winding chronograph movement in 1969, together with Heuer (now TAG Heuer and Buren).  Produced entirely in-house, Breitling’s caliber 01 automatic winding movement is a tri-compax layout (sub dials located at 9, 3 and 6 o’clock) chronograph that suddenly makes the Navitimer a very interesting timepiece to own again.

With a power reserve of 3 days, a column wheel, a vertical coupling clutch and compliant to the chronometer requirements of the COSC, we think this Breitling Navitimer 01 with its limited production – 2,000 pieces in stainless steel and 200 in 18 carat red gold – will be sold out very soon.

The Navitimer in its “Cosmonaute” version, was actually the first chronograph used in space. Even before the legendary Omega Speedmaster! You read it correctly. In 1962, astronaut Scott Carpenter brought his own Breitling aboard the Aurora 7 and it wasn’t until a few years later that Omega became the official watch of NASA (1966). Navitimer was also the official watch selected by the Aircraft Owners and Pilots Association, also known as AOPA.

The Breitling Navitimer Caliber 01 has grown a bit in size, up to 43mm in diameter. This shouldn’t be a problem for a pilot’s wrist though. The sleek lugs make this large case wearable for most guys.

Both the red gold and stainless steel models have a black dial with white sub dials, which should make it easier to read it. It is also the most popular combination the Navitimer has produced till date.

There are some other outstanding features which make the Breitling Navitimer Caliber 01 special. For starters, the Breitling wings logo is applied on the dial instead of ‘printed’. A transparent sapphire caseback will make it possible for the owner to glance at the automatic winding chronometer chronograph movement every once in a while. The number of the watch is engraved in the case back as well. 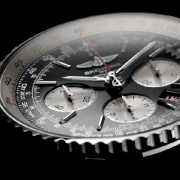 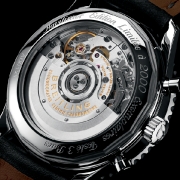 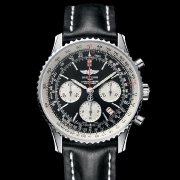 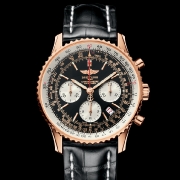 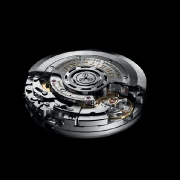