The name Parmigiani might ring a bell for fans of MotoringExposure familiar with their famous Type 370 Bugatti watch introduced in 2004. The watch allowed you to check time without removing your hands from the steering wheel.  It could be considered as essential for drivers of fast super cars like its namesake, the Bugatti.

Fortunately for those of us who don’t own a Bugatti, Parmigiani Fleurier also creates timepieces that are less outspoken in terms of design, but will still amaze you by the level of craftsmanship and sophistication. An example of such a timepiece is the Tonda 1950 Parmigiani, to be introduced at the SIHH 2011 January event in Geneva, Switzerland.

MotoringExposure has noticed that ultra thin watches are once again becoming a necessity in a man’s wardrobe. While it’s too early to write off bulky sports watches, they certainly don’t fit every occasion.

The 1950 Tonda is a very thin watch, only 7.8mm in height, but suits the wrist of the modern man with its diameter of 39mm. To be able to create such a slim timepiece such as the Tonda 1950, Parmigiani needed to develop an ultra thin movement that was up for the job. The new caliber PF700 self-winding movement has a diameter of 30mm and thickness of just 2.6mm. That’s very close to the famous caliber 2120 by Audemars Piguet, which still holds the record with only 2.45mm. However, this movement is based on the Jaeger-LeCoultre caliber 920 movement that has been around since 1969 and is not being used by Jaeger anymore. This could mean the PF700 is today’s thinnest in-house movement that is being used by the actual watch manufacturer. We will do some research on this subject very soon, as thin watches are back on the horological map and we want to know more!

Tonda’s new and very thin PF700 self-winding caliber has a power reserve of 42 hours and a micro-rotor that has been crafted from precious platinum (Pt950). The movement has been decorated with Côte de Genève and the wheels have been circular-grained and beveled by hand. Parmigiani Fleurier certainly seems to know what watch aficionados long for in a haute horlogerie timepiece.

Besides all the technical jibber-jabber, the Tonda 1950 has a simple yet sleek and sophisticated design that will fit almost any wrist. The teardrop lugs attached to the round case resembles fine watch designs of the 1950s. However, the size of the watch and the clean dial makes it ready for 2011.

The Tonda 1950 has two dial variants, ‘Graphite’ and ‘Grained White’ and comes in either an 18ct rose gold or an 18ct white gold case. Both are stunning but our personal favorite is the white gold version with the graphite dial! Classic with a twist, since the classical round wristwatch is mostly seen in yellow or rose gold.

An alligator strap with a polished ardillon buckle (depending on the case material and also delivered in either rose or white gold) perfectly finishes this thin beauty.  The price tag for the Parmigiani Fleurier Tonda 1950 has not been revealed yet. 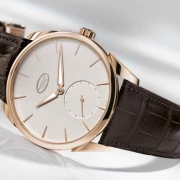 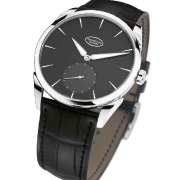 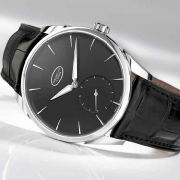 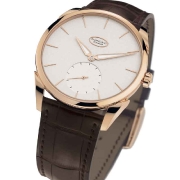