Get ready for the most powerful naturally aspirated road car in the world.

The most expensive and powerful Aston Martin to-date has finally been given some official specifications. Aston Martin has put their pinnacle of craftsmanship and technology through more than nine months of harsh hot and cold testing and high-speed runs on the legendary Nürburgring Nordschleife even though only 77 examples will be made.

Powered by a 7.3-liter V-12 that sits 257 mm behind the front wheel centerline, the naturally aspirated engine will be the most powerful on the road. After much testing, the V-12 has been officially rated at 750 brake horsepower and 553.1 lb-ft. (750 Nm) of torque. The 7.3-liter has been developed from the same 6.0-liter engine found in the DBS, DB9, and V12 Vantage models with the help of renowned engine builder, Cosworth. The mass of the One-77’s engine has been reduced by 25 percent over its 6.0-liter counterparts and features dry-sump lubrication, allowing the engine to be mounted 100 mm lower than any previous V-12 powered Aston Martin.

Official performance specifications are still being kept under wraps, but the 1.5 million-dollar Aston Martin One-77 is expected to have a 200 mph+ top speed and sub-3.5 second 0-62 mph time. We’ll keep you updated with performance figures when Aston Martin decides to finally release them. They better hurry up because we’re getting impatient! 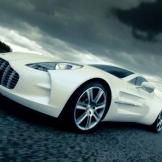 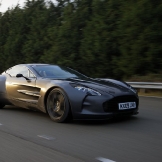 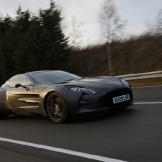 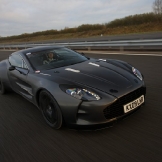 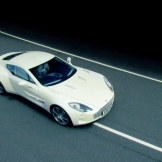 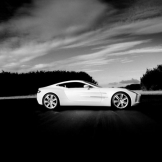 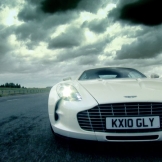