At the 60th Pebble Beach Concours d’Elegance Bentley Motors unveiled two new special edition Continental GTC and GTC Speed models exclusively for the North American market. Named for the number of examples that will be produced and their model year, the models precede the fall unveiling of the newly redesigned 2011 (2012 for US) Continental GT model. Both models feature unique interior and exterior styling while retaining the same compelling performance as their stock counterparts for an even more enjoyable drophead luxury experience.

Inside the handcrafted interior, both models are dressed in new leather, trims, and come standard with sport accessories. The GTC and GTC Speed each receive special Beluga leather with contrasting stitching, Bentley emblems, and piping. For the GTC, the stitching, emblems, and piping are a milky white, while the GTC Speed proudly displays the same features in Pillar Box Red. Both models also showcase a distinct Piano Black veneer that is contrasted by a shimmering engine-turned aluminum dashboard in the GTC and a dark aluminum dashboard in the GTC Speed. All 80-11 editions will flaunt new drilled alloy sport foot pedals along with “80-11” badges on the door sill plates and console.

Although the 80-11 editions will be available in Bentley’s wide array of exterior paints, they both receive a new, exclusive color option as well as new wheels and trim pieces. Customers looking to create an exclusive Continental can opt for the new Midnight exterior paint, available for only the 80-11 editions. The unique color compliments the Dark Grey Metallic soft top and Mulliner fuel tank cap that come standard on the 80-11 editions. Union Jack brightware badges appear on each of the front fenders paying homage to the brand’s British legacy. For the 80-11 GTC, new 14-spoke, 20-inch alloy diamond wheels are fitted and finished with polished spokes and black centercaps, displaying the classic “B” Bentley logo. On the more powerful GTC Speed 80-11, 20-inch Supersports wheels are standard and finished in a dark tint, highlighted by powerful red brake calipers.

Both the 80-11 special edition Continental GTC and GTC Speed keep the same high-powered twin-turbocharged W-12 engines as the stock models. Producing 552- and 600-hp, the GTC and GTC Speed offer superb performance speeding to 60 mph in just 4.8 and 4.5 seconds while achieving top speeds of 195 and 200 mph (190 and 195 mph if you’re daring enough do have the top down).

Production for the 80-11 Continental GTC and GTC Speed special editions will be limited to just 80 models for the 2011 model year and arrive at dealers in the fall of 2010. Bentley will be introducing a redesigned Continental that will be available as a 2011 model in Europe and a 2012 model for North America in the fall. No pricing has been announced, but expect all 80 models to be spoken for relatively soon. 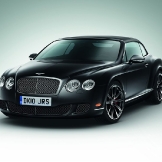 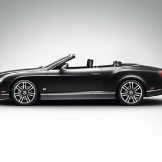 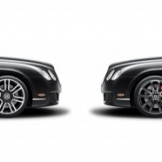 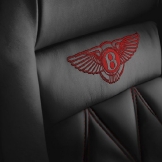 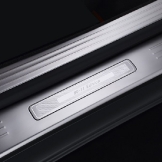