Just a few years ago, Jaeger-LeCoultre would be the last brand you thought of as a sponsor of extreme sporting events like the Dakar Rally. However, Jérôme Lambert, CEO of Jaeger-LeCoultre changed that all.  In a bid to revitalize the brand and attract younger consumers (25-50 years old), the company introduced a number of sporty looking watches.  And to kick-start it, the Master Compressor line-up was launched with the Memovox model. Jaeger’s bet on creating bigger and thicker cases, while still offering the same models/complications as in the regular Master series, was successful!

Now, in 2011, Jaeger-LeCoultre is supporting Greek motorbike racer Vasilis Orfanos, in his 5th year at the Dakar Rally. The Dakar Rally which began in the North of Argentina on the 1st of January will end on the 16th of January in Chile. A total distance of 9,500KM needs to be bridged by motorcycles, cars and trucks.

Vasilis Orfanos is wearing a Jaeger-LeCoultre Master Compressor Extreme World Chronograph. That’s a mouthful of watch, and one that should be rugged enough to support Vasilis during his race to Chile. The beating and shocks that his watch will bear are enormous, but if the Master Compressor Extreme World Chronograph is able to withstand this abuse, Jaeger-LeCoultre will undoubtedly be entitled to call this watch ‘Extreme’.

The Master Compressor Extreme World Chronograph, or reference 1768470 if you prefer, has a patented shock absorber system that protects the caliber 752 movement from vibrations and shocks. Including the hefty shocks during Dakar Rally, claim Jaeger-LeCoultre, as it has been designed and tested to withstand heavy-duty abuse.

The watch construction consists of an air cushion that absorbs up to 50% of the energy transmitted by vibrations and shocks.

And functionality doesn’t stop there. It’s able to simultaneously indicate the time in all 24 times zones and possesses a chronograph function that displays the elapsed seconds, minutes (30 minute counter) and hours (12-hour counter).

With a diameter of 46.3mm and a height of 16mm, this certainly isn’t a watch meant for everyone, but it will definitely suit a sportsman like Vasilis Orfanos. It is available with both rubber and leather straps, ingeniously designed to be interchangeable without the use of tools. 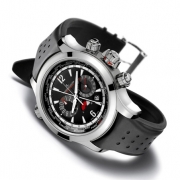 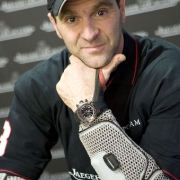 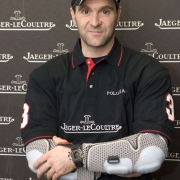 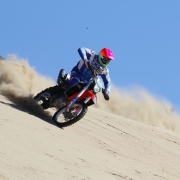 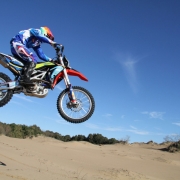