In early 2010 Porsche introduced their new hybrid-powered racecar, the 911 GT3 R Hybrid as a test bed for the continued development of new hybrid technology. Later that year, Porsche again showcased their advancements in hybrid technology with the 918 Spyder Concept that achieved 94 mpg while reaching a 198-mph top speed and lapping the famed Nürburgring in under seven and a half minutes. These two models proved to be the basis for Porsche’s next step in the advancement of the new technology with the new Porsche 918 RSR.

The new hybrid racer is an evolution of both the 911 GT3 R Hybrid racecar and 918 Spyder Concept. The reliability, efficiency, and performance of the 911 GT3 R Hybrid’s powertrain in endurance racing led Porsche to use the same flywheel accumulator in the Porsche 918 RSR. But, instead of the flat-six engine in the GT3 R, the new 918 RSR will use a tuned version of the 918 Spyder’s high-revving 3.4-liter twin-turbocharged V-8 producing 563 horsepower at 10,300 RPM. The power from the V-8 is sent to the rear wheels through a six-speed constant-mesh transmission with longitudinally mounted shafts.

While the 918 Concept uses electric motors at the front and rear axle, the Porsche 918 RSR uses just two 75 kW motors at the front axle, similar to the system found in the 911 GT3 R Hybrid. Energy is gained during braking, during which the electric motors function as generators. The electric motors then store the energy in the flywheel accumulator that spins at speeds of up to 36,000 RPM. When the flywheel is fully charged, the driver can use the stored energy to send an additional 150 kW (75 kW each) of power to each electric motor bringing the maximum power output to 767 horsepower. The stored energy is available for approximately eight seconds, during which the flywheel accumulator is electromagnetically stopped. Porsche has also designed the system to aid fuel consumption and delay the need for pit stops during a race, giving the 918 RSR a huge advantage over conventional racecars.

Porsche’s goal for designing the 918 RSR was to follow the “form follows function” philosophy. Taking inspiration from the 908 (1969) and 917 (1971) racecars, the shape of the body flows from front to rear with powerful extended wheel arches and large rear air intakes. The front features new carbon fiber air flics and splitters for downforce, while roof-mounted air intakes cool the engine and a large rear spoiler and diffuser keep the racer planted. Between the ram air intakes above the engine is a visible fan, paying homage to the legendary 917 racecar. Larger central-locking 19-inch wheels are fitted with no profile racing slicks are used for efficient tire changes. The entire 918 is dressed in a new “liquid metal blue chrome” paint that highlights the technologically advanced character of the racer, while Porsche Hybrid Orange is found on the brake calipers and side stripes.

Inside the Porsche 918 RSR is all business. Hugging the driver is a bucket seat covered in brown leather, a tribute to Porsche’s vintage racers. Sitting alongside the driver is the flywheel accumulator that closely resembles a modern flux capacitor. The modern center console that debuted in the 918 Concept features racing functions and rocker controls instead of the user interface. A new steering wheel gives drivers information on engine speed and gear selection and recuperation display.

The Porsche 918 RSR will wear the number 22 paying tribute to the Porsche 917 racecar that set a distance record of 3,315.21 miles at an average speed of 138.13 mph at the 1971 24 Hours of LeMans. The 918 RSR will serve as a racing laboratory for Porsche to further develop the hybrid technology. Porsche has not announced when the 918 RSR will make its racing debut, but we have our fingers crossed for LeMans! 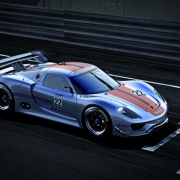 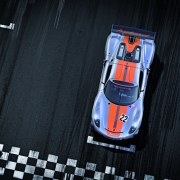 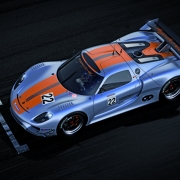 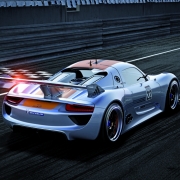 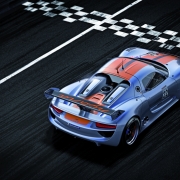 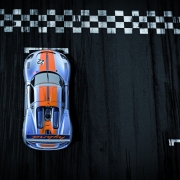 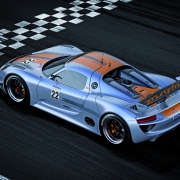 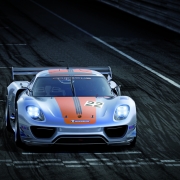 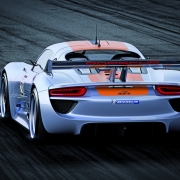 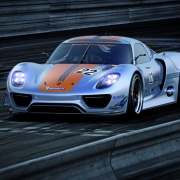 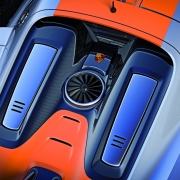 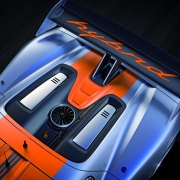 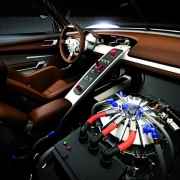 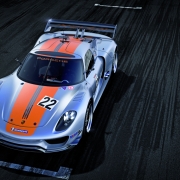 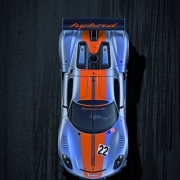 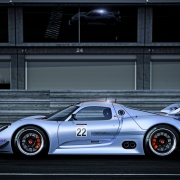 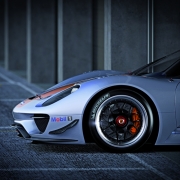 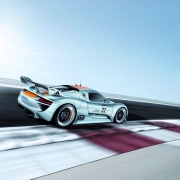 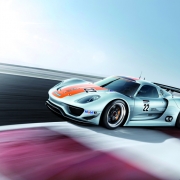 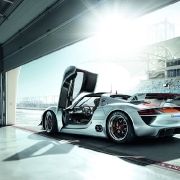 What race would you like the 918 RSR make its debut? Leave a comment and let us know!