What better way to celebrate 75 years than some jolly good horsepower?

A quarter of a century ago, the first automobile bearing the Jaguar title, the SS Jaguar 100, rolled off the assembly line. After World War Two, the company dropped the “SS” name and cemented itself as one of England’s most prestigious automotive companies with classic models such as the XK 120, E-Type, and MK II.

To mark the brand’s 75th anniversary, CEO of Jaguar Land Rover, Dr. Ralf Speth, challenged Jaguar’s team of engineers to design and build a special-edition XKR. The result was the Jaguar XKR 75; an exclusive model that delivers a pure driving experience. To create a diver-focused XKR, Jaguar worked with the RSR motorsport engineering team to enhance performance by adding power and chassis upgrades, designing new aerodynamic bodywork, and refining the interior.

Powering the Jaguar XKR 75 is the renown supercharged 5.0-liter engine. The supercharged V-8 receives an increase of 20 hp and 22 lb-ft. of torque, producing a fierce 523 hp and 483 lb-ft of torque. The breathtaking power does not go unheard, for the XKR 75 features a new sports exhaust with a new crossover pipe and larger exhaust outlets for improved acoustics and performance. Although the XKR 75 retains the electronically limited 174 mph top speed, 0-62 mph acceleration drops to just 4.4 seconds. To handle the increase in power of the Jaguar XKR 75, engineers have retuned the suspension, lowering ride height by 15 mm up front and 10 mm at the rear, while increasing camber and spring stiffness for a more agile and dynamic ride.

Complimenting the XKR 75’s roaring performance are exclusive aesthetic and aerodynamic enhancements. Unique to the Jaguar XKR 75 is a new Stratus Grey exterior paint. Optionally, the muscular lines of the XKR can be highlighted by a body graphic running from the front bumper to the rear haunches. For high-speed stability a new aerodynamic package has been added, consisting of a front splitter, side sills extensions, a rear diffuser and larger rear spoiler to reduce lift. The athletic appearance is further emphasized by new 20-inch Vortex forged lightweight alloy wheels wearing a diamond turned with dark grey finish.

The XKR 75’s driver-oriented personality continues in the interior. The cabin is dressed in Charcoal and Ivory stitch leather, complimented by a Jet suedecloth headliner and a Piano Black center console. Unique to the anniversary XKR is a tread plate bearing the “XKR 75” nameplate.

Jaguar’s 75th anniversary model will make its debut at the Goodwood Festival of Speed on July 2nd. Only 75 examples of the Jaguar XKR 75 will be produced for the UK, Germany, France, Italy, Netherlands, and Belgium markets. The XKR 75 will be available in July for £85,500 OTR (+/- 129,000 USD), with deliveries beginning in October. 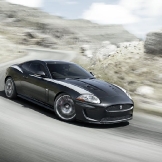 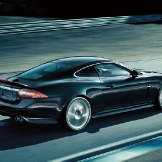 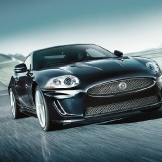 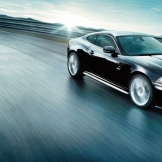 Is the Jaguar XKR 75 the best version of the XK model yet?