Porsche Club of America (PCA) was founded in 1955, to honor the great German sports car and bring collectors and drivers together. In its 55th year of existence, PCA has more than 100,000 members and is the largest single-marquee car club in the world.

To help celebrate its anniversary, Georg Bartkowiak (active member of Porsche Club Germany and renowned horologist) and Vu T.H. Nguyen (executive director of PCA) determined this milestone should not pass unnoticed. Porsche sports cars and TAG Heuer watches have a history of being linked together since Steve McQueen wore one and drove the other in the unforgettable 1971 classic, Le Mans. Creating a limited edition watch to celebrate this union only seemed a logical choice.

The story goes it was race car driver Jo Siffert who introduced Steve McQueen to Heuer, thus beginning his long association with the company. As the Monaco 1133 was the watch McQueen wore and popularized during the movie, , PCA decided this model should be their watch of choice. Heuer was one of the first brands to introduce mechanical automatic chronograph movement and several race drivers have been spotted wearing one ever since. In the past, Motoring Exposure covered another racing legend – Clay Regazzoni – wearing Heuer watches as well.

Readers of Motoring Exposure do not need a detailed introduction to TAG Heuer’s Monaco, so we’ve used the KISS (Keep it Simple, Stupid!) principle to describe the new edition. Besides retaining original features of its predecessor, it will have:

Perhaps the most important aspect for many will be the price! All 55 Heuer Monaco 55 Porsche Club pieces will retail on PCA’s website (www.pca-tag.com) for $5,500, and will be available in September 2010.

The limited number of pieces versus the high number of (TAG) Heuer Monaco followers will probably make this watch disappear in the blink of an eye. Be prepared! 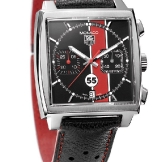 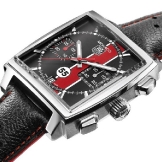 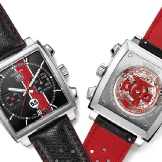