The Rolex Explorer II – sometimes referred to as the ‘Steve McQueen’ Rolex, despite the fact he never wore one – is one of the best examples of an unpopular watch becoming a highly sought-after collector’s item.

Introduced in 1971, the Explorer II was an addition to the Explorer model released in 1953, and intended as a tool watch for cave explorers. This first Explorer II watch, ref.1655, featured an extra hour hand (in a bright orange color) for a 24-hour notation. This is an important feature to cave explorers who may become easily disoriented after long periods underground.

During the entire production period of the ref.1655 Explorer II watch, Rolex only changed small details of the watch. Besides the different bracelets Rolex used during the 1970s (riveted, folded and later on, solid) the second hand went from a straight shaped ‘needle’ to a hand with two circles, one on the long end and one on the short end.  The color of the 24 hour hand changed from orange to red-orange and the font on the dial had minor differences on later models.

The movement inside the Explorer II was identical to the movement used in the GMT-Master models, also featuring a 24 hour hand. Caliber 1570 and 1575 movements were used for the entire line-up of ref.1655 Explorer II watches.

It wasn’t until 1984 that Rolex introduced a new Explorer II, ref.16550. Changes included the sapphire crystal, a caliber 3085 movement – with a double bridge – and a white dial in addition to the black dial model. The shape of the hands changed drastically as well, especially the 24 hour indicator which changed from a small red-orange arrow shaped hand to a long and sleek designed red 24 hour hand with a white arrow at the end.

This model, ref.16550, in combination with its white dial, had some issues with the white paint which faded to a more creamish color. The black models encountered problems as well, showing cracks in the glossy finish. Some owners had this faulty dial replaced by a Rolex Service Center. Those who didn’t are now owner of the so-called and highly sought after cream-dial Explorers or – in case of the black dial models – spider-web dial Explorers. The ref.16550 is also occasionally referred to as a transitional model, as the new reference 16570 was introduced in 1989. For Rolex in particular, 4-5 years is a very short production time for watches.

The Explorer II ref.16570, featuring a newer type of movement (caliber 3185) had – aside from the bracelet – only one major optical change from its predecessor, the use of black hour marker rings and hands on the white dial version. The cream-dial model had white gold hour markers and hands, just like the Submariner and GMT-Master for example. It is said that beneath the black paint, the hour markers and hands are still white gold.

Currently, the ref.16570 is considered the Explorer II’s actual cave explorer timepiece made by Rolex. However, during the BaselWorld 2010 exhibition, Rolex leaked – for the first time – information regarding the new Explorer II, which was about to be released at BaselWorld. In the last few weeks before BaselWorld, Rolex decided not to and postpone this new Explorer II. Reasons? Only Rolex knows, but MotoringExposure guesses they had plenty of new models to unveil and didn’t want to distract the attention from the new Submariner and Explorer-upgrade (ref.214720) models in particular.

If you haven’t decided on which Rolex sports model to get, wait and see what the new Explorer II will be about in 2011. 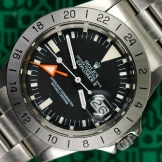 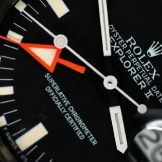 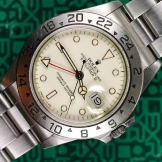 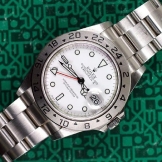 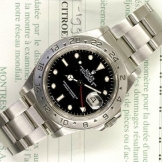 All photos in courtesy of SubGMT.COM