Sébastien Loeb (1974) is a World Rally Championship (WRC) driver from France, currently in the Citroen World Rally Team. From 2004 till now, Sébastien won the WRC seven times in a row. This is a record in the history of WRC and winning 7 times in a row is also a motor competition record in general.

Loeb, a watch lover himself, wanted to create a watch that reflects his active and most of all – automotive – life style and should be close to what rally driving is about. Together with an impressive duo of watchmakers, Jean-François Ruchonnet (renown for his TAG Heuer Monaco V4 & Cabestan) and Sébastien Perret (responsible for all recent Marvin designs), Sébastian Loeb created a stunning new timepiece for Marvin Watches.

The Marvin Watches LOEB Special Edition evokes the world of rallying in its smallest details, thanks to the input of the current greatest rally driver in the world. This 44mm wrist watch has a number of very nice referrals to the world of racing, for example: the pushers that have the same shape and structure as the gear change paddles, the red colored springs between the lugs that reminds us of the suspension system of a rally car and the shaped sub dials that look like dashboard instruments.

PVD has been used for the pushers and a part of the winding crown (screw-down to guarantee resistance against water and dust) and the case has been created from sand blasted stainless steel with a satinized finish. The back of the case has the inscription “Drive me crazy” engraved, followed by the number of this limited edition watch and an autograph from Sébastien Loeb.

Mind you that this watch comes in two flavors: an automatic mechanical chronograph version and a quartz version.  Only the mechanical version is limited to 777 pieces, the quartz version is part of the regular production run of Marvin. The limited edition model is using proven technology when it comes to its engine: an ETA 7750 movement. The quartz version is an ETA G10.711. Both movements offer the same functionality of course; it is just what you prefer.

To celebrate the 7th WRC victory in a row, Marvin has put 7 stars on the bezel of the automatic version of the LOEB Special Edition.

Super Luminova illuminates the dial of this Marvin Watches LOEB Special Edition in the dark, which is available in either black of silver. All versions will be delivered on a racy black rubber strap with a tongue buckle. Marvin gives a two-year warranty on these watches. 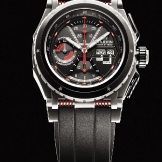 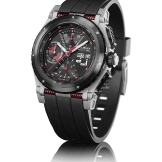