The Camaro that was born to race.

At the 2010 SEMA Show, Chevrolet rocked the stage with the new Corvette Z06X Concept, a track-only Corvette built to showcase GM’s performance parts available for Corvette owners. Debuting alongside the Corvette Concept was the Camaro SSX, a closed-course track model with the soul of a Grand Am racer.

The Camaro SSX Concept is downright brutal, with all aspects of driving comfort eliminated in the name of performance. Just like its track-ready Corvette cousin, the Camaro SSX Concept is covered in Icy White Metallic paint with contrasting door graphics and red accents. To shed weight, the Camaro was put on a carbon fiber diet as the stock hood, fenders, door, and deck lid were all replaced with the lightweight components. Downforce is increased with a carbon fiber front splitter, side skirts, and large adjustable rear wing.

To extract maximum performance from the stock Camaro the interior has been transformed into a bare-bones environment. Carpeting? No. Sound-deadening material? The LS3 sounds better without it. Rear seats? There ain’t no junk in this trunk. In fact, one could argue that the only parts that offer any comfort are the alcantara steering wheel and gearshifter. And the only reason alcantara is used, is for added grip. The rest of the interior is strictly business, with an SCCA-approved roll cage and window net, racing seat with five-point harness, fuel cell, and fire suppression system for safety and weight savings.

Under the hood of the Camaro SSX Concept is a pure, unadulterated 6.3-liter LS3 V-8 uninhibited by a restrictive airbox or exhaust. For added power, the LS3 has been modified with new camshafts, cylinder heads, and dry-sump oil system from Chevrolet Performance Parts. The raw LS3 is mated to a six-speed manual featuring the twin-disc clutch from the Corvette ZR-1. New 20-inch lightweight racing wheels and sticky race tires are fitted and work with the modified production suspension with Pfadt licensed components to slice through corners. Hidden behind the lightweight wheels is a four-wheel disc racing brake system with six-piston front and four-piston rear rotors clenching down on drilled and slotted rotors.

The new Chevrolet Camaro SSX Concept was developed in cooperation with both Pratt and Miller and Riley Technologies. The Concept isn’t slated for production, it is a platform to showcase the performance parts available to Camaro enthusiasts. We’ll keep you updated with any production plans; we have our fingers crossed too! 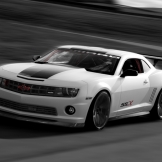 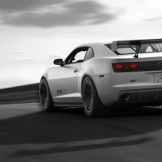 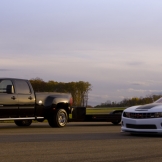 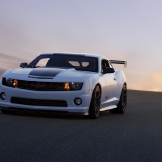 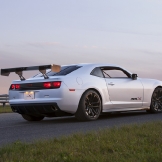 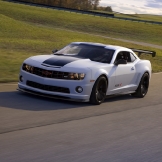 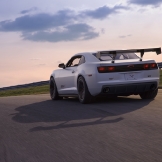 Out of the two track-only concepts that Chevrolet debuted at SEMA, which would you chose to drive: the Corvette Z06X or Camaro SSX? Leave a comment and let us know!