A bit of British design with some German soul.

After taking on the Porsche Cayenne and Volkswagen Touareg, and receiving much success from the Range Rover Sport RS600, the next logical step for CEO Afzal Kahn and his team of designers was to transform the Audi Q7. The new program focuses on creating a bolder appearance for the Q7 while providing a luxurious interior.

The entire program for the Audi Q7 draws inspiration from the Project Kahn Range Rover Sport RS600, which wore muscular bodywork without being overly ostentatious. The same principal applies to the Q7, which features more aggressive bodywork that doesn’t give the SUV a flamboyant attitude. The most notable aspect of the program is the widebody kit which adds wider wheel arches, a sleek rear bumper with trapezoid exhaust tips, and a new roof spoiler for high-speed stability. The entire kit is painted in Soft Pearl White paint, contrasted by executive privacy glass. To complete the exterior package, a welcome lighting package is fitted that lights the ground next to the Q7 with Ice White LEDs.

Complementing the new bodywork is a number of different 22-inch wheel options from Project Kahn. Customers can choose from the RS-T1, RS-T2, RS-D, or the featured RS-X wheels, each measuring 9.5 x 22 at the front and rear. To improve handling a new electronic lowering module has been fitted along with 285/35/22 Toyo tires.

Inside the stock Audi interior that arguably sets the standard in its class is even more bold and luxurious. All seven seats are covered in rich perforated black quilted nappa leather with contrasting Maranello Red stitching. To match the interior and stunning Soft Pearl White exterior paint, a red rev-counter and white speedometer have been installed. Aluminum pedals are also fitted to add a sporty feel for the driver. As part of the program, Project Kahn also installs an entertainment package with two seven-inch headrest-mounted screens, wireless headphones, DVD player, and remote control for the rear seats. 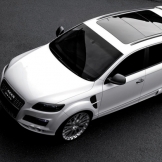 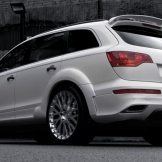 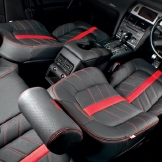 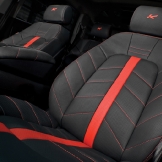 What is your favorite design feature of the Project Kahn conversion for the Audi Q7? Leave a comment and let us know!