It all started in 1980 at the Geneva Motor Show. Audi unveiled an automobile that defined all-wheel drive performance and became a lasting motorsport icon. Named the Quattro for its four driven wheels, the two-door coupe used state-of-the-art all-wheel drive system and turbocharging technology. In 1984, Audi introduced the Sport Quattro to meet homologation numbers for Group B rallying, and showed Audi’s commitment to performance and advancement in technology. Twenty-six years later, at the Paris Motor Show that same commitment still remains as Audi introduced the new Quattro Concept to commemorate the 30th anniversary of the unveiling of the legendary Quattro.

The new Audi Quattro Concept is a modern interpretation of the classic Quattro model. Audi’s latest developments in weight-saving technology and Quattro all-wheel drive are featured, while a powerful turbocharged five-cylinder makes the new concept as legendary as the original.

Based on the sexy and powerful Audi RS5, the new Audi Quattro Concept features a lowered roofline and shorter wheelbase to create a compact and dynamic design. While the exterior still bears some resemblance to the A5 and RS5 models, the Quattro Concept still wears a unique design. Many features echo those of the original Quattro such as the powerful C-pillar, flared fenders, the four rings along the side, and air outlet on the passenger side of the hood. Audi designers used a single-frame grill without chrome accents to add to the technical character of the concept. The bumper features two upright air intakes beneath both LED headlights to show power and also functionally increase airflow. The rear also bears a strong resemblance to the Ur-Quattro, with a rectangular profile and retro LED taillights. Both the rear hatch and hood remain unpainted on the inside to enhance the visual character of the concept.

Inside, the Audi Quattro Concept is clean and minimalistic. The RS5’s four seat capacity has been reduced to two, with the rear seats being replaced with a shelf for helmets and luggage. Two filigree bucket seats sit up front and weigh only 40 pounds each, and can be equipped with either three- or four-point safety belts. The dashboard is designed to be driver-oriented, and wraps around the interior with rally beige leather and satin black carbon trim. Facing the driver is a digital instrument cluster, displaying everything from driving information to the MMI interface. The driver can switch between ‘Everyday’ or ‘Race’ mode, the latter of which displays information in a retro 1980 digital display reminiscent of the one found in the Ur-Quattro. The Quattro Concept also comes with a “prayer book”, paying homage to the rally success of the Ur-Quattro that provides up-to-date information on the track as though a co-pilot was in the passenger seat.

One of the most enticing aspects of the new Audi Quattro Concept is Audi’s use of a turbocharged five-cylinder, just like the original Quattro. In 2009, Audi introduced a new five-cylinder that was used in the TT-RS that made 340 horsepower. That same engine is used in the new Quattro Concept; however it has been tuned to produce 408 horsepower between 5,400 RPM and 6,500 RPM, and 354 lb-ft. of torque in a plateau from 1,600 to 5,300 RPM. Weighing only 403 pounds, the 2.5-liter helps contribute to a superb curb weight of just 2,866 pounds and power-to-weight ratio of 9.48 lb./hp. The powerful engine and low weight helps the concept reach 62 mph in just 3.9 seconds. Not only is the new five-cylinder light, but it is also efficient, achieving 28 mpg with the use of turbocharging and FSI direct fuel injection.

The first Quattro featured Audi’s permanent all-wheel drive system which helped it achieve great success in road and rally races. The new concept still uses the iconic all-wheel drive system, but with lightweight and modern technology. The new drivetrain is 6.6 pounds lighter than the previous version and uses a self-locking crown-gear center differential and torque vectoring to improve traction. Torque is also actively distributed between the two rear wheels via sport differential to virtually eliminate understeer.

With the Quattro all-wheel drive system providing superb grip, the lightweight suspension, wheels, and brakes provide a thrilling and responsive ride just as the Ur-Quattro. Major suspension components are made of aluminum to reduce weight and were developed and designed to provide greater feedback. New 20-inch cast aluminum seven-spoke wheels measuring 9J x 20 with 275/30 tires and feature a center-locking mechanism for quick tire changes. Behind the lightweight wheels are drilled carbon fiber-ceramic brake discs clamped by red-anodized six-piston calipers for fade-resistant braking. 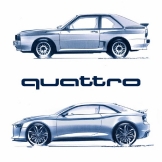 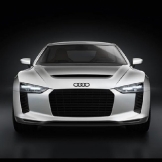 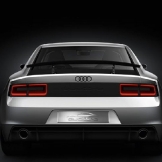 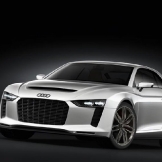 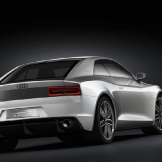 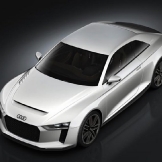 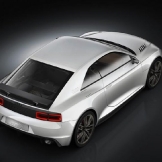 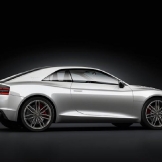 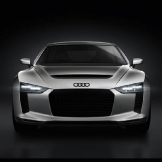 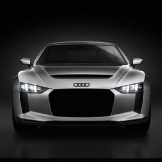 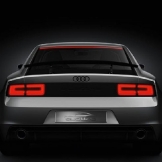 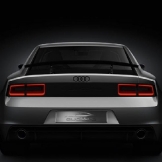 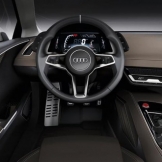 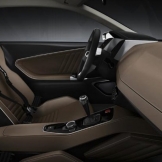 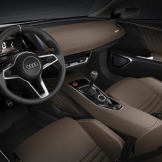 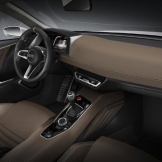 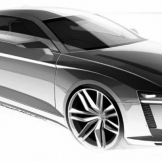 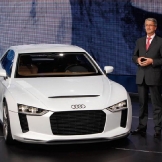 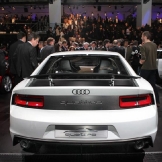 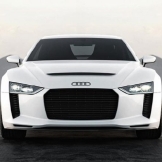