Jaguar celebrates 75 years of innovation and style with the Jaguar C-X75 Concept for the future.

For the past year, Jaguar has been celebrating its 75-year anniversary with special edition models featuring more power and exclusive style. The biggest celebration was at the Paris Motor Show, where Jaguar unveiled the new C-X75 concept, a futuristic gas-turbine electric supercar with new design language inspired by iconic Jaguar models.

The goal of the C-X75’s design was to showcase the new design language of Jaguar and incorporate the marque’s classic philosophy of using natural and flowing lines to create simple, yet elegant forms. Design Director of Jaguar Cars, Ian Callum, calls the new Jaguar C-X75 Concept “as close to a pure art form as a concept car can get and we believe it is a worthy homage to 75 years of iconic Jaguar design.” The new drivetrain allowed for a simple fuselage design that is enclosed by four powerful wheel arches that portray pure performance. Design elements came from the C- and D- Type racers of the 1950’s along with the 1966 XJ13 Le Mans Prototype.

Jaguar also incorporated new active aerodynamics on the C-X75 to showcase the pursuit of performance. To increase cooling, an opening in the front grille and brake cooling vents open only when needed. The carbon fiber rear diffuser of the Jaguar C-X75 Concept uses an active airfoil that lowers at high speeds to increase downforce. During this process exhaust vanes alter the flow of exhaust gasses to improve the Venturi tunnel’s performance for better stability.

The new Jaguar C-X75 Concept is capable of a 205 mph top speed, all without the use of a conventional piston engine. Instead, Jaguar’s concept is powered by four independent electric motors and two micro-gas turbines. Each of the four electric motors are mated to one wheel, making the C-X75 a four-wheel drive vehicle.  Weighing only 110 lbs (50kg), the motors allow provide superb weight distribution, efficiency, and packaging while producing 195 bhp and a total output of 1,180 lb-ft of torque.  The use of the four electric motors and lithium ion batteries allows the C-X75 to have a range in pure electric mode with zero emissions of 68 miles. Once the batteries run out of power, two micro-gas turbines can efficiently recharge the batteries for a theoretical range of 560 miles. Each of the micro-gas turbines have been developed in conjunction with Bladen Jets to produce 94 bhp and run at a steady 80,000 RPM.

Although the C-X75 is a “green” supercar, Jaguar shows that performance doesn’t have to be a dirty word. Each of the electric motors that power each wheel propel the concept to 62 mph in just 3.4 seconds and through the quarter-mile in just 10.3 seconds at 156 mph, using a single-speed transmission. And, because it tips the scales at just 2,900 lbs, the C-X75 boasts a power to weight ratio of 578 bhp per ton. The four-wheel drive system is different from a conventional mechanical setup, but still retains superb drivability with torque vectoring and instantaneous traction and stability control.

Inside the Jaguar C-X75 Concept, the British company has focused on creating a more driver-oriented environment and showcasing new technology. Both seats are fixed, with the controls, pedal box, and main binnacle facing towards the driver. New TFT touch-screens with Jaguar’s state-of-the-art driver interface are featured, displaying advanced performance information. The main display for the driver sits inside the instrument cluster providing the driver with status and rpm of the two turbines in addition to speed. To symbolize their partnership with Bremont, a modern timepiece is positioned in the middle of the dashboard.

The new Jaguar C-X75 Concept represents 75 years of innovation and design, while showcasing future technology and styling from the British automaker. There is no word on if the concept will see production, but look for the technology to trickle down into the lineup in the future. 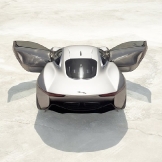 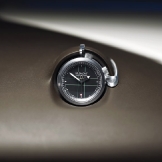 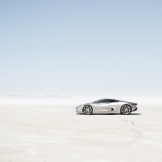 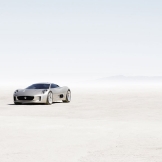 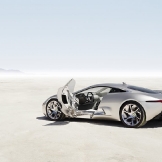 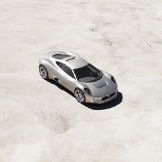 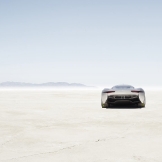 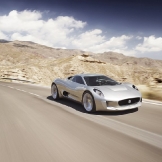 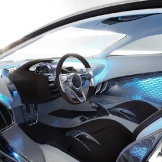 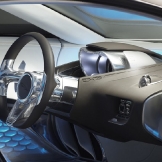 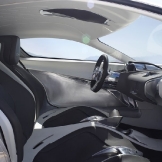 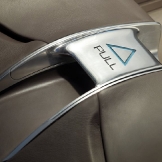 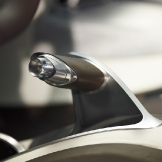 What do you think of the absence of a traditional gasoline engine in Jaguar’s new C-X75 concept? Leave a comment and let us know!