After some turbulent times at Gemballa, the company is back with a bang.

The beginning of 2010 was one of the darkest in Gemballa’s 29-year history, as the company lost its founder and CEO, filed for bankruptcy, and prepared to close down for good. After being broken up by liquidators and shut down, it looked as if the famed Porsche tuner would become a distant memory until Andreas Schwarz came into the picture. After obtaining “an investment of millions”, the new CEO reserved the rights of the old Gemballa and launched Gemballa GmbH, saving the brand from the junkyard. Since August, Schwarz and his employees have been working to continue the iconic designs that made the original Gemballa famous. The 29th year of the brand ends on a high note, with the introduction of the Gemballa Tornado, a limited-production tuning program for the Porsche Cayenne 958; the first to debut for the reborn tuner.

The new Tornado is a statement from Gemballa; a statement that makes you forget about the mess that marred the past year for the brand, and shows that the company is back for good. The exterior of the Gemballa Tornado continues the well-known design language that the brand has been known for and complements them with a potent power upgrade.

The exterior design of the Tornado has Gemballa written all over it. Well, not literally, just the tailgate wears the Gemballa name, as it is cut into a piece of carbon fiber using a precise ultra-high pressure water jet cutting process. The tailgate also is dressed in a lightweight carbon fiber skin that wraps around the new rear taillight design. The rear bumper and valence are also made from the lightweight material and make room for the four individual exhaust outlets; a longstanding Gemballa design theme.

The face of the Gemballa Tornado is equally as distinct as the rear. The program gives the Cayenne a serpent-like appearance, readying its poisonous strike. A large, open-mouth grille and two side vents send vast amounts of cool air directly to the turbocharged V-8, while cooling ducts beside both fog lights cool the front brakes. A new carbon fiber hood with twin air vents further optimizes engine cooling. A set of LED daytime running lights sit aside both front wheel arches and give the Tornado an imposing presence.

Gemballa’s latest creation isn’t all about replacing body components with carbon fiber to reduce weight and create a unique appearance. “Carbon-fiber is a high strength, low weight structural material that needs to be used honestly, and not just for decoration,” explains GEMBALLA GmbH CEO, Andreas Schwarz. Gemballa customers are accustomed to varying extremes in temperature, which can cause cracking of the carbon fiber components. To prevent this, Gemballa uses a different manufacturing method to ensure the utmost quality and durability. Almost all steel body components from the hood to the fenders, front and rear bumpers, side sills, and doors are made from carbon fiber and save a total of 154 lbs. in weight. The overall width of the Cayenne is also increased to 2.05 meters due to the extended fenders. All recessed surfaces such as the doors and rear fascia are finished in a black matte visible carbon fiber for a signature look.

The imposing stance that the widened fenders and striking fascia create is finished by new lightweight wheels. Measuring 10.0J x 22 up front and 12.0J x 22 at the rear, the forged monoblock alloys wear 295/36 ZR22 front and 255/30 ZR22 rear shoes. Due to their lightweight construction the narrow-spoke wheels weigh no more than the Cayenne’s stock 20-inch wheels. Behind the wheels are upgraded six-and four-piston front and rear Brembo brakes, clamping down on cross-drilled and slotted rotors for superb stopping power.

Beauty isn’t just skin deep with the new Gemballa Tornado. Even though the company already offers a “Stage One” upgrade for the Cayenne’s twin-turbocharged V-8 that results in 580 horsepower, Gemballa is taking the Tornado a step further with a “Stage Two” upgrade. Engineers have set a goal of producing 35 to 40 percent horsepower increase and 30 percent torque increase, for an approximate 675-700 horsepower and 737 lb-ft. of torque. The vast power upgrade will also involve drivetrain upgrades for durability.

Gemballa hasn’t released pricing for the new Tornado tuning program. Engineers are currently developing a new interior along with the “Stage Two” engine upgrade. Only 30 models will be produced in 2011 to celebrate the brand’s 30th anniversary.

2010 may have been the darkest in company history for Gemballa, but it has ended on a promising note with the new Tornado. The new tuning program shows hope for a company that was virtually defunct, and begins the celebration of the brand’s 30th anniversary for 2011. 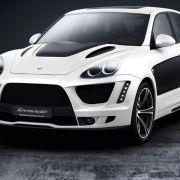 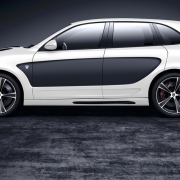 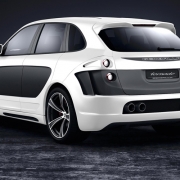 What do you think of the first Gemballa program since the brand’s revival? Leave a comment and let us know!