The Mercedes-Benz A- and B-Class models have seen widespread success throughout the world with over 2.5 million sales, by offering a practical and efficient package to customers. Sport however, has not played a huge part in the development of either small car – until now.

At the Mercedes-Benz plant in Rastatt, Germany, where the A- and B-Classes are assembled, Plant Manager, Peter Wesp, decided to challenge his staff by taking the B-Class to a new level of performance. Wesp’s idea was to create a B-Class that followed a certain set of specifications:

* The spatial concept of the B-Class was to remain unchanged.
* On the outside too, there were only to be minor indications of the conversion work.
* The interior was to be upgraded in line with the new vehicle class being aspired to.
* And the result of the conversion was to be in large measure suitable for day-to-day driving.

The challenge was readily accepted by Andreas Würz, a Foreman in the Technical Vocational Training department and Matthias Rieger, an Electrics/Electronics installation Foreman. Together with a team of twelve second- and third-year trainees they set out to build a one-of-a-kind B-Class.

They quickly found a B 200 CDI that was already given to the training department for “learning purposes” and set to work disassembling the car while Würz went looking for a powerful engine to use. What he found was a 5.5-liter V-8 and a seven-speed automatic gearbox that sent 388 horsepower and 391 lb-ft. of torque to the rear wheels, in contrast to the B-Classes’ front-wheel drive layout. While there had been no rear-wheel drivetrains developed for the B55 AMG, the team found that the rear axle from the W 210-series E-Class fit. The team designed a new subframe that could fit the rear axle, and after a great deal of forming and welding, were able to mate the axle to the B-Class. With the main drivetrain components in place the team set to work creating the exhaust. Using replacement parts, they designed a full dual-exhaust system with center pipes that emitted a strong burbling exhaust note.

But, they weren’t finished. The team went back to the Mercedes-Benz parts bin to find new brakes, wheels, and suspension components for the B55 AMG. New, C32 AMG perforated and internally ventilated 345 x 34 mm front and 300 x 30 mm rear brakes were fitted for added stopping power. The team also installed five-spoke AMG Sport wheels that measured 8.5 x 18 up front and 9 x 18 at the rear. The wheels were then fitted with 235/40 ZR 18 Y front and with 255/35 ZR 18 Y tires for added grip to handle to new V-8 powerplant. The setup was then finished with a new K&W coilover suspension for improved handling and a lower center of gravity.

Inside, the team set to work in giving the B55 AMG a sport-oriented and luxurious interior that was fitting of its newfound performance. Alcantara was fitted to the roof liner, A-, B-, and C-pillars, while the seats were dressed in a combination of alcantara and leather. The exterior also saw a few modifications with painted radiator louvres and smoked headlight lenses.

“The V8 power unit fitted amazingly well, and we were even able to use the original engine mounts” said Würz. “We have not made any measurements yet, but we should manage a sprint to 100 km/h (62 mph) in under six seconds.”

Training Manageress, Manuela Rascher, was also proud of the team, expressing that “The B 55 shows what our training workshop can do.” When asked if there are plans for future projects such as this, she responded with “We may have some surprises in store…”

We at MotoringExposure hope so!

Interior:
-Alcantara A-, B-, and C-pillars
-Alcantara roof liner
-Leather and alcantara seats

And what would this be without video of the B55 doing a burnout? 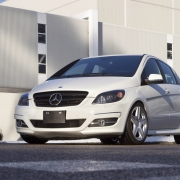 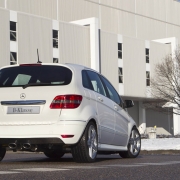 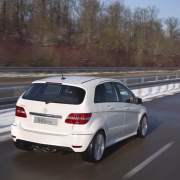 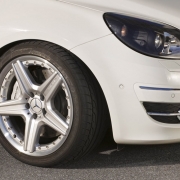 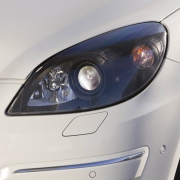 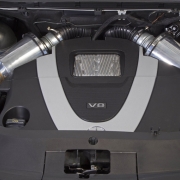 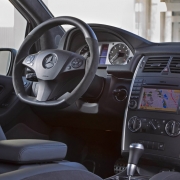 What do you think of the Mercedes-Benz B55 project car? What should their next project be? Leave a comment and let us know!