Who said that you need 500 horsepower to break the 186 mph mark?

Remember the old turbocharged five-cylinder that powered the Audi Ur-Quattro? Audi’s returned to making potent five-pots and Roland Mayer, founder of Motoren Technik Mayer GmbH, has gone back to tuning them. In 1992, MTM broke the 300 km/h (186 mph) barrier with Audi’s inline-five in the Quattro S2, making it the first street legal Audi to achieve such a feat of speed. Eighteen years later, Roland Mayer and MTM are at it again with the Audi TT RS, this time with the goal of breaking 300 km/h with less than 500 horsepower.

So, while other tuning companies held the belief that achieving a 300+kph top speed is virtually impossible without 500 horsepower, MTM set out to prove them wrong at the Nardo high-speed track in Italy with a 472-horsepower Audi TT-RS. “It’s not decisive what we measure on the dynamometer but how many bhp you get on the road” proclaims Roland Mayer. “The right master plan has a bigger effect on driving dynamics, acceleration times and maximum speed than the search for a maximum in performance values.” With the right master plan in place, MTM pushed the TT RS to its limit and not only broke 300 km/h, but achieved a top speed of 312 km/h (193.88 mph) on the high-speed track.

In order to achieve such a high top speed with the TT RS, the turbocharged five-cylinder had to undergo numerous upgrades. To reach the potential that the 2.5-liter held, engineers removed the stock turbocharger and replaced it with a larger, more powerful unit. The German tuner also fitted a complete exhaust system to the MTM TT-RS in order to improve exhaust flow and increase performance. To complete the transformation, MTM retuned the ECU, thus increasing power to 472 brake horsepower at 7,000 RPM. The added power helped reduce the 0-100 km/h acceleration time to just 3.9 seconds and reach the top speed of 312 km/h.

The potent engine wasn’t the only factor in passing the 300 km/h hurdle. MTM also fitted new wheels, tires, and brakes to ensure safety and stability at such high speeds. New 20-inch Bitmoto nine-spoke forged alloy wheels were fitted for their high-strength capabilities and wore high-performance Dunlop Sport Maxx Tires. To bring the TT RS to a stop, MTM installed massive 15-inch brakes with eight piston calipers at the front axle. 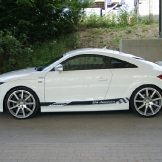 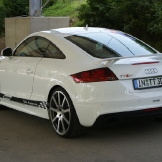 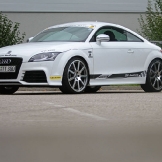 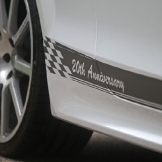 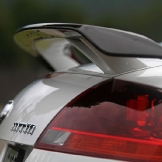 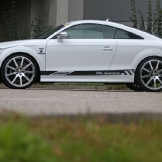 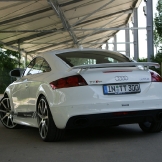