Since its debut in 2002, the Touareg has been one of Volkswagen’s most versatile vehicles. The 2.5-ton SUV is capable of handling some of the toughest off-road terrain yet still provides occupants with a comfortable ride and ample storage space. This balance of flexibility, utility, and sport gives the Touareg a certain character, one which ABT Sportsline emphasizes with their latest tuning program for both diesel engines.

One of the main focuses for ABT Sportsline was to give the SUV more sport. “More power wouldn’t hurt with a car as diverse as this, but it was important for us that the tuning suited the characteristics of the Touareg”, explains General Manager Christian Abt. “Since its launch in 2002 the Touareg has been a huge success for us. We have systematically worked on our interpretation of the SUV since then, whereby it is clear, in our opinion, that there should be special emphasis on sport.”

And sport it received. Both diesel engines that are available for the Touareg were modified to produce more horsepower and torque. For the 240 horsepower, 405 lb-ft. 3.0-liter turbodiesel V-6 two power packages are available from ABT Sportsline. The first Touareg tuning program uses a chip tuning program to increase output to 282 horsepower and 428 lb-ft. of torque. The second program for the V-6 includes a new ABT turbocharger and ECU upgrade, which boosts power to 310 horses and 450 lb-ft. of torque. ABT Sportsline also offers a program for the 340 horsepower, 590 lb-ft. 4.2-liter turbodiesel V-8. By just upgrading the ECU, the Bavarian tuner was able push the V-8 to make a mighty 385 horsepower and 642 lb-ft. of torque.

ABT Sportsline also enhances the overall appearance of the Touareg, taking a more subtle approach to create a confident figure. Up front, the Touareg features a new grille that gives the SUV a bolder face while accentuating the powerful lines in the front bumper. The rear wears a new roof spoiler that increases downforce and a new apron that seamlessly integrates the new quad exhaust pipes.

To finish the appearance package, ABT Sportsline offers two sets of unique BR and CR wheels. Both alloy wheels can be ordered in 20- or 22-inch sizes with high-performance tires to handle the added power outputs. Additionally, ABT Volkswagen can also equip the Touareg with an electronic car lowering system for the adaptive air suspension for enhanced handling.

The tuning program for the Volkswagen Touareg can be purchased as a full program or as individual accessories. Pricing and acceleration figures have not been released. 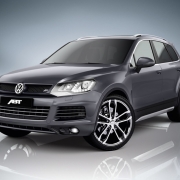 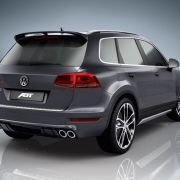 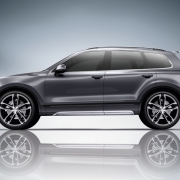 Do you think the ABT Sportsline tuning program highlights the Touareg’s character without going over-the-top? Leave a comment and let us know!