At the 2010 SEMA Show in Las Vegas, Nevada, Chevrolet unveiled the Corvette Z06X Concept, a no-nonsense track car with all the racing goodies. Based on the Corvette Z06 equipped with the 1LZ package, Z07 performance package, and CFZ carbon fiber package, the Z06X takes the American sportscar to another level of performance that isn’t just about sheer horsepower like its ZR-1 sibling.

Racing has always been an integral part of the Corvette’s DNA. The current generation has enjoyed much success in numerous racing series from the American LeMans Series to club racing. To give that same success and exhilarating feeling of racing a track-prepped car to enthusiasts, Chevrolet teamed up with Pratt and Miller, Corvette Racing partners in the American LeMans Series, to develop and produce the Corvette Z06X Concept.

“Racing is an integral part of Corvette performance and technology,” said Tadge Juechter, Corvette chief engineer. “This concept car represents a mid-point between our GT race car and the production Z06, prepared by the team responsible for the Corvette Racing C6.R race cars, and featuring many performance parts owners can choose today.”

Transforming the Z06 into a track-ready racer is a long list of modifications, with the principal of “form follows function” in mind. The exterior is focused on reducing weight and creating downforce to help power the Corvette through high-speed corners and aid with braking. A large adjustable carbon fiber rear wing sits at the rear and, along with the carbon fiber splitter and rockers, aids in improving the overall aerodynamics of the Z06X. To save weight, the Corvette Z06X is fitted with the carbon fiber roof panel and B-pillar panels from the ZR-1, a carbon fiber raised hood, carbon fiber headlamp housings, and a shatter-resistant polycarbonate rear window. A Low-gloss Icy White Metallic paint covers the racer, while certain carbon fiber components such as the hood, splitter, and wing show off their carbon fiber construction and are highlighted by red accents.

Inside are more of the same race-oriented modifications that shed weight and protect the driver. All unnecessary components such as the carpeting, radio, and sound deadening material have been removed to save weight. In their place is an SCCA-spec roll cage and window net, racing pedal set, racing seat with five-point harness, and fire suppression system. Aiding the driver is a video camera system to aid in maneuvering and a driver’s drink system for long races.

To power the Z06X, Chevrolet will use their 7.0-liter LS7 V-8 (the same one used in the Corvette Z06) mated to a six-speed Tremec manual transmission. The powerful V-8 will use a new low-restriction air-intake system for added power, and a high-capacity radiator and cooling system to handle racing. Again, weight is cut with the use of 19-inch front and 20-inch rear black lightweight racing wheels shod in Michelin racing tires. The suspension is fully adjustable with new mono-ball control arm bushings, stabilizer bars, and coil-over struts, giving drivers the ability to create an optimal racing set-up. Large Brembo carbon ceramic brake rotors clamped by special brake pads bring the Z06X Concept to a halt and offer fade-resistant braking.

So far, the Corvette Z06X Concept is just a concept to showcase the many different performance parts Corvette owners can choose from. We at MotoringExposure however, believe that Chevrolet will put the Z06X into production in the future to directly compete with Dodge’s track-ready Viper ACR-X. No pricing or production has been announced, but we all have our fingers crossed. 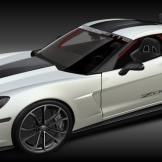 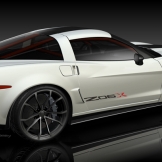 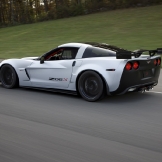 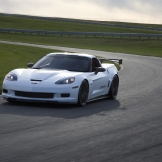 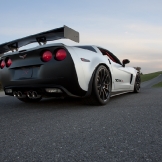 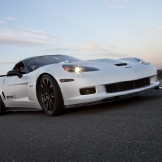 Which would you rather drive in a race: the Chevrolet Corvette Z06X Concept or Dodge Viper ACR-X? Leave a comment and let us know!