It was described as being “neither a coupe nor a convertible” by Ferry Porsche when the German automaker unveiled the 911 Targa concept in 1965 at the International Motor Show in Frankfurt. Named after the Targa Floria road race in Sicily, Italy where Porsche had achieved numerous victories, the convertible-type 911 was put into production in 1966 as a 1967 model. Forty-three years later, that same 1967 model inspired Alois Ruf to build the Ruf Roadster.

Based on the current 997.2 generation 911, the new Ruf Roadster features the classic design characteristics of the 911 Targa models. Instead of using the same sliding glass roof on the current Targa model, Ruf Automobile has fitted a silver integrated roll cage behind the front seats to match the 1967 model. The roof over the front passengers is made of carbon fiber and is split in two, lightweight pieces that can be easily removed. The rear features a soft plastic window that is made of three-layer polyglass, and can be lowered with an electric motor. With the front roof removed and rear window lowered, the Ruf Roadster retains the classic Targa open air feel. In addition to the Targa transformation, Ruf has equipped the Roadster with a more aggressive front bumper and 19-inch forged aluminum wheels for a more distinct appearance.

Customers will have two engine choices for the new Ruf Roadster, both featuring Porsche’s 3.8-liter flat-six engine. For the “base” Roadster, a 400-horepower engine will be used. Customers looking for intense performance can opt for a 560-horsepower turbocharged engine. Both engine choices come standard with a six-speed manual transmission and rear-wheel drive, with Porsche’s PDK transmission and all-wheel drive as options. Unfortunately Ruf won’t be fitting the 550-horsepower 4.5-liter V-8 from the RGT-8. Instead, the company will offer a limited-production fully electric powertrain option for the 2011 model year.

The interior of the Ruf Roadster remains untouched with the exception of an ergonomic steering wheel. The goal was to create a classic driving experience that isn’t offered with the current Cabriolet or Targa models. But, Ruf does offer a range of interior accessories that can be fitted at the customer’s request. 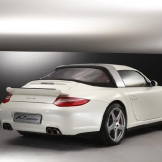 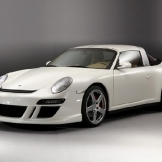 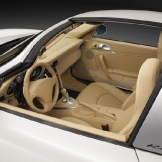 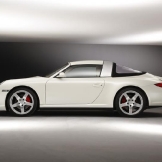 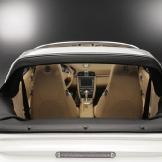 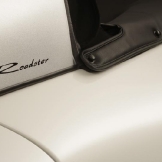 Would you pick the Ruf Roadster over the current 911 Targa? Leave a comment and let us know!