Mercedes-Benz offers their SL-Class in a number of different variations, from the “base” SL550 to the ultra high-performance SL65 AMG Black Series. The only problem for some customers is that the Black Series is only available in coupe form, unlike the rest of the lineup which feature convertible tops. The zenith of the Roadster variants is the SL65 AMG, a model that offers a bit more comfort than the Black Series, but fails to compete in terms of performance. To solve this dilemma facing such a vast consumer base, wheelsandmore has unveiled a tuning program that retains the open-air feel of the SL65 AMG, and trumps the Black Series in terms of power.

At the heart of both the SL65 AMG and its stronger sibling, the Black Series, is a twin-turbocharged 6.0-liter V-12 packed with tuning potential. In the SL65 AMG, the engine is tuned to an output of 604 horsepower and 738 lb-ft. of torque, while the Black Series pumps out 661 horsepower. Knowing what the engine is capable of, wheelsandmore created a tuning program for the ECU that sent power to 697 horsepower and a colossal 848 lb-ft. of torque. In addition to the upgraded ECU, wheelsandmore also fitted a handmade exhaust system with remote-controlled valve flaps, giving the driver complete control over the SL’s exhaust note.

For the exterior of the SL65 AMG, wheelsandmore stayed away from adding bodywork to an already intimidating roadster. Instead, the German-based tuner fitted the SL 65 AMG with new 6-Sporz wheels that showcase the muscle and power hidden beneath the hood. The three-piece, six-spoke forged wheels measure 10 x 20 up front and 12 x 20 at the rear. The set of lightweight wheels are shod in 255/30/20 front and 205/25/20 rear Dunlop high-performance tires for improved traction. To complete the fitment, wheelsandmore has developed a LowMaXX electronic lowering module that allows for a custom ride height. When the SL65 AMG reaches 45 mph, the module returns the suspension to its original settings for safety and comfort.

The complete wheelsandmore SL65 AMG program is currently available. Customers have the option to purchase the entire program or individual accessories. 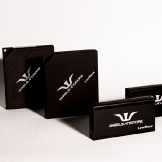 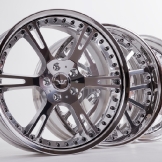 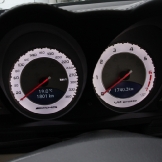 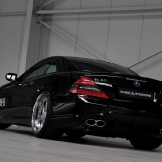 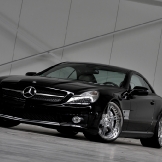 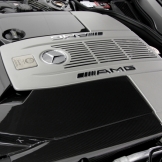 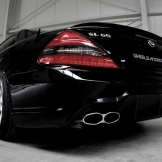 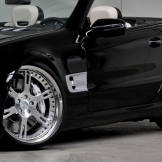 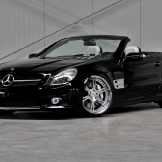 Would you rather have the Mercedes-Benz SL65 AMG Black Series or the wheelsandmore-tuned SL65 AMG? Leave a comment and let us know!